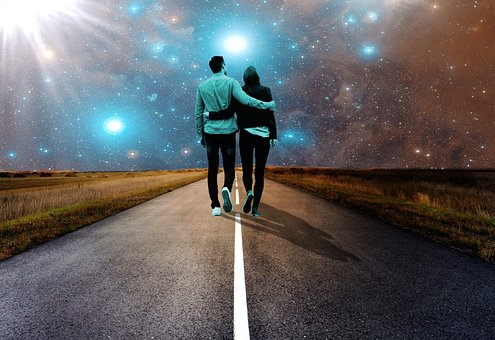 As my mediumship was opening up more and more I found myself guided to visit cemeteries. Very often it was the cemetery where my dad and grandfather are buried but it’s also been cemeteries in other places I’ve  traveled. I’ve always seen spirits there, and I think the energies in cemeteries are also a kind of “tuning fork” for me for my mediumship.

Sometimes I haven’t needed to visit the cemetery – the spirits came to me.

A couple of years ago, I was living in a flat a few blocks from a big cemetery and one night as I was going to bed, I was watching some youtube videos as was my habit but the videos were interrupted by a parade of spirits leaving the cemetery. My attention was drawn to them walking up the sidewalk toward my apartment. The building was an old house with a large lawn and they walked up the sidewalk and filled the lawn around the apartment. Then 20 or so of them, some of which I had known personally came into my bedroom with various messages they wanted to pass on to me. The loudest message was that I needed to be concentrating on my mediumship work, because it was my purpose and I needed to start helping others with evidential based mediumship readings to heal what they called “deep seated” grief. They were referring to “stuck” grief or the grief that I had experienced with my grandfather’s death.  It’s grief that is deep and has been really difficult to shift and heal.

It’s the evidentiary aspects of a reading or the specific details that would only be known between the living person and their deceased loved one that are so helpful for healing grief. Once those details can be shared, the words that were left unsaid before someone died can be exchanged and healing can take place.

I’ve had some unusual readings a few times sometimes with spirit communicators who were quiet people in life. The spirit’s personality in life is still an aspect of the personality they have on the other side. But of course, there is a softening on the other side because they have a much higher perspective because they have transitioned.  And there have been a few who were really quiet. When this first happened in a reading I couldn’t figure out why I wasn’t hearing much from them. I then realized that they were just a quiet person and after some prompting with questions they began to open up.

I used to feel that establishing how someone died was a good way to begin a reading. However, sometimes spirit communicators do not want to discuss how they died.  When that happens that’s my indication to simply allow them to deliver their message and stop asking questions. This is THEIR time to communicate with their loved ones and they have an agenda. The spirit communicator is always “in charge” of a session because it’s their time to be heard. Sometimes they have been trying to connect with their loved one on earth for a while and it’s taken some pushing to get their loved one to contact a medium to arrange for a reading so that they can share their message.

I remember an example of a reading with a man who had died prematurely and his sister was getting me to connect with him for her. At first I didn’t know he was her brother and he came into my awareness about an hour before her session as was often the case at that time.  When I saw him I knew he was here for the reading I had coming up and he confirmed that. When I asked him how he died he said nothing and simply turned his back. So, I asked him what I could tell my client from him so that she would know I was connected to him.  He said only two words. I asked if I could please have more and he repeated the words again. When my client came onto the zoom call I relayed the words he had given me to tell her and she indicated that these words had been on the 2 tattoos he had on his arms.

This was an unusual way of connecting to someone, but literally any kind of information can come through, it’s very dependent on the spirit. They are all emotional beings and they have messages they want to relay.

Sometimes I’ve had clients who wanted to connect with one family member and as soon as I started connecting to their grandma another family member came in because the client had unfinished business and grief and very much needed to hear from that loved one. Sometimes so much healing can start when a spirit communicator comes in that the client doesn’t even realize they need to hear from.

I had a very strange experience a few years after beginning my mediumship development. I was attending a funeral with a friend and shortly after the service began as the priest was standing to sing a hymn I saw what looked like neon green graffiti on the wall behind his head. I was horrified initially, thinking why did I not notice this when we walked into the church – this is horrible! “Why was this not painted over before the funeral?” Then I began to think – how would someone get into this church and leave graffiti. It didn’t make sense and over the time of the hymn I realized that I was the only one in the church seeing the large neon green symbol.

Throughout the funeral I kept glancing at the large spot on the wall behind the priest and it was still there. At the end of the funeral, as we were all leaving, I made the excuse to go back in, saying I had “forgotten something” in the seat. And when I looked – the symbol was still there.

Our family in spirit is all around us, loving and supporting us from the spirit world. We only need to be open to hearing from them.